Help Bring a NEW Classic Monster to The Witch's Dungeon 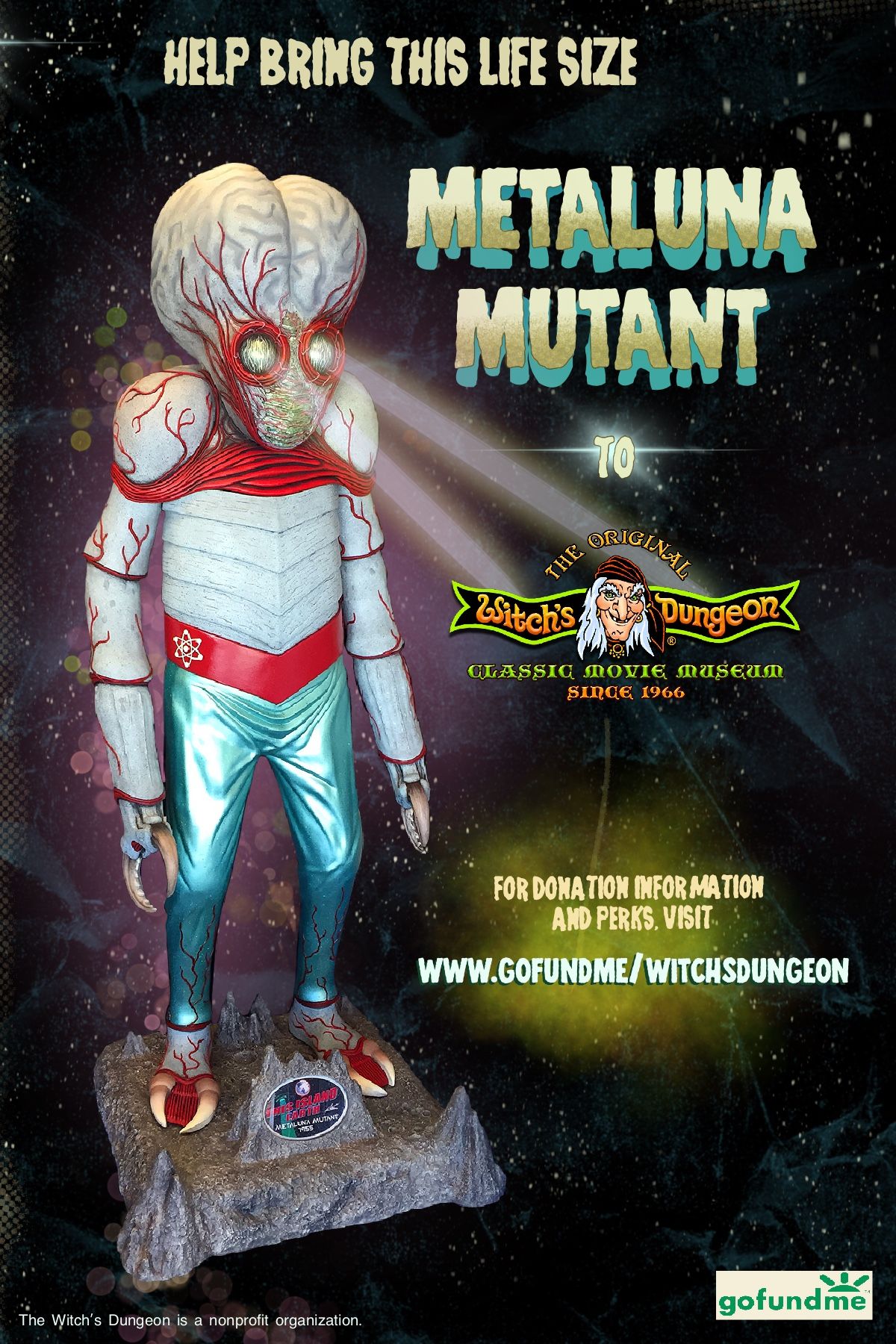 ACWNN are teaming up with The Witch's Dungeon to bring the Metaluna Mutant from the 1955 Sci-Fi classic to The WItch's Dungeon.  Opened in 1966 by a then 13-year-old Cortlandt Hull  (Nephew to Henry Hull of Universal's 1935 classic "Werewolf of London "), The Witch's Dungeon Classic Movie Museum has become the longest-running wax museum/classic horror memorabilia exhibit of its kind.

Along with displaying one of a kind props costumes and set pieces, The Witch's Dungeon takes visitors on guided tours that feature highly accurate life-size figures based on the classic films of Lon Chaney, Boris Karloff, Bela Lugosi, Vincent Price, and others from the golden age of horror & sci-fi cinema.

Currently, The Dungeon houses 20 of these striking figures, but having recently moved to a larger location, it has been presented with the opportunity to use the extra space to expand its collection- more specifically in the area of its "Atom Age Alcove".

Occupying this shadowy corridor is "The Creature From the Black Lagoon " whose impressive 6 ft. 3" figure cast entirely from the original suit mold from the 1954 classic.  Neighboring the Gilman is one of the "Mole People " from the 1956 film whose head and hands have also been cast from the film's original costume molds.

Missing however from this Atom Age trifecta has been the iconic "METALUNA MUTANT" from the groundbreaking sci-fi film "This Island Earth" (also released by Universal in 1955). Missing until now.

Just recently The Witch's Dungeon located an incredible lifesize (7 ft) figure of the eerie mutant expertly sculpted by artist Doug Hildebrand, but we need YOUR help in securing the remaining funds needed to bring him home to The Dungeon.

The Witch's Dungeon is and has always been a  NON-PROFIT ORGANIZATION that exists SOLELY on the generosity of donations made by its wonderful patrons. Every aspect of its exhibits have been either hand-built by Cortlandt or donated directly by the studios or the families of the actors it tributes.

For this reason, we are calling on all Monster Kids out there for the donations needed to bring this icon of Sci-Fi celluloid to The Dungeon- where its story will be preserved for the enjoyment of generations to come.

For those donating $50 or more, we will add your name to a commemorative plaque that will feature the names of all those who donated to this campaign.  This plaque will be placed in the "Movie Prop Room" next to the ORIGINAL Metaluna Mutant headpiece used in the actual film which is on display year-round at The Dungeon.  This headpiece (the only one in existence) was gifted to The Dungeon by makeup artist John Chambers who saved it from being thrown away back in the 1970s.

If you'd like to make a donation please visit www.gofundme.com/witchsdungeon and help bring this figure to a place where its story can be preserved for generations to come.